Cambest – Lisheen – Abercrombie
Standing at Deo Volente Farms, Flemington, NJ
Perhaps the only living standardbred with a street named after him,
Lis Mara Drive in Port Au Prince, Haiti In adherence to the devastating earth quake, a portion of champion Lis Mara’s racing and stallion earnings were donated for new house construction, resulting in more than 20 new residences in the ravaged area.

Lis Mara is Fastest and richest son of still speed champion Cambest p, 1:46.1 from the great broodmare Lisheen, full sister to leading sire Albert Albert. Lis Mara is twice a millionaire and world champion. His 1:47.3 Breeders Crown win in 2006 was the fastest ever for a Breeders Crown race. Lis Mara was the first horse in 20 years to successfully defend his Canadian Pacing Derby title

In that Lis Mara contributed so much to the construction of Deo Volente Farms, management especially CEO Mike Gulotta determined the great free-for-all champion to return from New Zealand to the farm he was so instrumental in building to live out his days and be available to North American breeders.

Lis Mara is standing at Deo Volente Farms and all foals will be eligible to the escalating New Jersey breeding program. 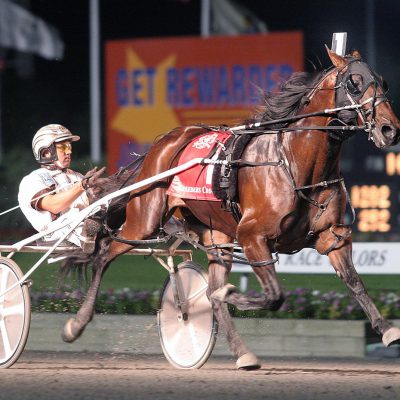